Missionary to Japan with Converge Worldwide 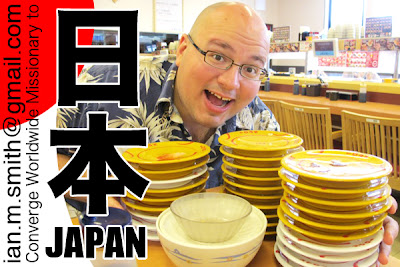 I know my Happy Birthday Buddha series ended abruptly, and it was not for lack of material--but because I was on the road and decided to travel without my computer.

The Sunday before last, I left a church picnic early to get on a bus bound for Busan. The trip from Chuncheon to Busan takes about five hours by express bus. As evidence of my superior planning abilities I arrived in Busan just as all of the mass transportation was suspending service for the night... throwing caution to the wind I got on the last city bus of the evening, hoping and praying it was going towards where I needed to go--unfortunately it was headed back the direction that I had come.

When I realized my mistake (ten minutes into the countryside outside of Busan) I got off the bus and found a taxi to take me to the nearest jjimjilbang (spa/sauna) where I was able to stay the night for 8000 won; about $ 7 US. Thankfully the bus fare and the taxi ride only cost me about 10$.

I had slept in a jjimjilbang once before--sleep isn't the right word--I had laid on the floor of a jjimjilbang fitfully attempting to sleep once before, and my second night in a jjimjilbang turned out to be a encore. There were a couple of young women chatting loudly on their cell phones, a few ajumma watching TV nearby, and entirely too much light. The one upside was being able to take a shower after the long bus ride, which was almost worth the sleepless night. The next morning I took a 30 minute long subway ride down to the International Ferry Terminal.

The security procedures for boarding the ferry, while almost exactly the same as for boarding an airplane, seemed much less hurried and stressful. I had booked a round-trip ticket to Fukuoka for a little less than 100$, however port and fuel fees added another 50$ by the time the trip was done. I had an image of an old-timey boat putting across the East Sea/Sea of Japan at a leisurely pace--I had even hoped to be able to go out on the deck and enjoy the sea air. However, most of the ferries in between Japan and Korea are modern hydrofoils so my romantic notions were dashed as I found my assigned seat. Thankfully I had lots of room to stretch out, and there were large windows an an in-flight(boat?) movie. The movie was a Japanese movie, 'Be with You,' subtitled in Korea which I understood a surprising amount of.

Things proceeded fairly uneventfully as I arrived in Fukuoka Japan. It was a beautiful day and I took the bus to Hakata Station where I would be taking a bus to Fukuoka. Hakata Station is a mammoth cross between a shopping mall and a mass transportation hub. I walked around for hours and barely saw a tenth of it. There are thousands of shops and restaurants--every kind of food you could want. It was all a little overwhelming, so for my first meal in Japan I got gyudon at Yoshinoya. Anyone who knows me probably wouldn't find that very surprising considering my well known love of the beef bowl.

The express bus to Miyazaki set me back about 50$ round-trip. It was smaller than the express bus from Chuncheon to Busan, but it was cleaner and had a bathroom. The trip from Fukuoka to Miyazaki took about four hours and the scenery through Kyushu was beautiful! The crowd at the back of the bus was an eclectic group--there was a woman with a crying baby, a couple with a feisty little dog, a woman who looked like the ghost from the movie 'Ring,' a girl who was dressed more appropriately for Harajuku than Kyushu, and me the big Gaijin. I was surprised at what an motley crew was assembled in the last two rows of the bus.  I really enjoyed the trip!

As I arrived in Miyazaki I was greeted by Nonaka-sensei, the pastor of Life Water Christian Church of Miyazaki. I had been introduced to Nonaka-sensi by Pastor Lee in Chuncheon, but this was our first time meeting. Him and his family graciously hosted me for my short stay in Miyazaki--and they were very wonderful hosts. I arrived late in the evening and we went to his home where his wife Shiho had made delicious curry. Both Nonaka-sensei and his wife's English was much better than I had been led to believe--and we had a wonderful time of conversation over dinner.

The next morning I borrowed Nonaka-sensei's bicycle and rode out to the beach a few miles away. It took a while to get used to riding on the left side of the road. The beach was absolutely beautiful and I was sad that I had failed to pack a pair of swim-trunks when I moved to South Korea. Instead I waded out in the water to my knees and enjoyed the beautiful vista. There were old men fishing on my right. Professional equestrians exercising their thoroughbred horses on the beach to my left, and surfers waiting for the perfect wave a few hundred feet out in front of me. It was an incredibly beautiful morning in Miyazaki.

After returning to the house, Nonaka-sensei and I went out for lunch and had the local specialty, Chicken Nanban. For those familiar with Japanese cuisine, Chicken Nanban is essentially Karage (Japanese fried chicken) that has been dipped in a sweet vinegar sauce and served with egg salad used for dipping the chicken. It was delicious. Afterwards we went to a nearby riverside park and sat with our feet in the water and prayed for each other.

Nonaka-sensei then took me to Aoshima--where there is a beautiful botanical garden and one of the oldest shinto (and most important) shrines in Japan. Aoshima is a small island that rests on top of a beautiful geological anomaly locally known as the 'Devil's Washboard.' These are naturally occurring rock formations have the appearance of being man-made--they are beautifully mysterious.

Miyazaki boasts of being the birthplace of Jimmu, the mythical first Japanese emperor--and for this purpose many places in and around Miyazaki have special significance to Shinto, the Japanese monarchy and Japanese nationalism past and present.

After eating some mango ice-cream at the botanical garden we went for a ride along the coast and into the mountains. We returned to his home for dinner with his wife and daughters. Shiho prepared some delicious okinomiyaki!

On Wednesday morning Nonaka-sensei, Shiho and I visited the Hakko ichiu monument that was constructed at the hight of Japanese militarism in 1940. This monument purports to be upon the ground where the mythical first Japanese emperor Jimmu established his kingdom. The foundation of the monument was built with stones collected and donated from around East Asia--including stones from China, Korea, South East Asia and even Canada.

Despite the imperialistic overtones this tower continues to have a powerful place in the Japanese psyche. It was the starting point of the 1964 Olympic Torch relay to Tokyo. Nonaka-sensei, Shiho and I prayed for the nation of Japan at this base of this monument.

Afterwards we went to have sushi together for lunch--kaiten sushi in Japan is better than high-end sushi in the States. For some reason Koreans don't understand sushi either--and insist in dipping it in red pepper sauce! I was so thankful for my time together with the Nonakas. They then took me shopping for gifts for people at the church back home and I found out that one of my favorite stores in Korea, Daiso, is actually owned by the Soka Gakkai, shocking!

I took the bus back to Fukuoka and arrived around 7pm. I checked into a hotel (originally I was planning on staying at a mangakissa, but the opportunity to sleep in a bed for the first time in three months trumped my desire to rough it at a sketchy manga cafe). I then went out and explored a little and got some tonkotsu ramen! After checking my schedule and realizing that I could have probably stayed in Miyazaki another night I spent most of the evening moping around and feeling stupid for wasting money on a hotel room (about $55 US).

The following day I explored Fukuoka some more, and had gyudon at Sukiya and another bowl of tonkotsu ramen (I ordered it with too much pepper though and it wasn't nearly as appetizing as the bowl I had the night earlier). In retrospect I probably shouldn't have eaten so much before getting on a boat to another country. Familiar with the the ferry terminal things went smoothly. I met a pair of recent WSU grads who were backpacking through East Asia, and one of them happened to be from Lacey Washington--it was a small world. The water was very choppy this time, and I felt myself getting a little sea sick, thankfully the trip was only three hours long.

After getting to Fukuoka I helped the two travelers find a map of Busan and purchase rechargeable bus/train cards and then accompanied them on the train as far as our paths stayed together. Unfortunately I had forgotten about my tight schedule, and by the time I reached the bus station they had sold all the tickets for the last bus of the night to Chuncheon. Stuck in Busan another night I returned to the jjimjilbang--but not before stopping at several stores in a fruitless search for earplugs.

There were less people at the jjimjilbang this time, and I found a place to sleep that I thought would allow me to actually get rest--but after I had nodded off a few ajoshi (male counterpart to ajumma--although there is some debate as to whether ajumma should be considered a third gender) camped out nearby and I was woken up and kept awake by their snoring most of the rest of the night.

The following morning I got a bus back to Chuncheon and arrived around one in the afternoon. I slept most of the rest of Friday afternoon. Despite my few idyllic days in Miyazaki, the entire trip proved to be very exhausting. I did manage to get a new tourist visa though--which was the ultimate purpose for the trip. The trip with lodgings and food probably rounded out to be around 500$, the cost of a round trip ticket to Tokyo from Seoul.
Posted by Ian Smith at 9:49 PM No comments: