Equity and the Injustice of God. 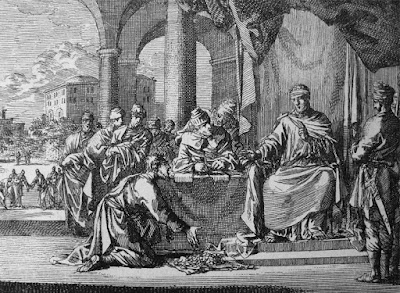 "Master, I knew you to be a hard man, reaping where you did not sow, and gathering where you scattered no seed, so I was afraid, and I went and hid your talent in the ground. Here, you have what is yours."

Inequality is baked into this reality. Where one was born, the color of one's skin, access to education, IQ, musical ability, artistic ability, height, disabilities, economic factors, motivation, beauty--people are unequal in so many ways it is mind boggling. God has distributed throughout the people of the world a near infinite number of inequities.

In the secular world, it is in vogue to consider any inequalities (in criminal justice, education, economics or otherwise) as the products of systemic injustices--and their eradication as the moral crusade of our time.

Uncritical, emotionally impressionable Christians, swept up in the fervor of this movement may actually be blaspheming God and removing moral agency from individuals when they parrot the popular ideologies that espouse the radical reordering of society and economics that would be necessary to effect an equality of outcomes in these domains of human existence.

"If you really fulfill the royal law according to the Scripture, “You shall love your neighbor as yourself,” you are doing well. But if you show partiality, you are committing sin and are convicted by the law as transgressors." James 2:11

The radical witness of the early church was not to ascribe moral value to these inequalities, but to call everyone to take up their cross and follow Jesus in whatever circumstances God placed them. Whether poor or rich, male or female, Jew or Greek, slave or free--whatever situation you were placed, you were called to live out a life of love and reconciliation.

We are not supposed to show partiality to the rich, and at the same time, we are not to show partiality to the poor--each must bear the cross in the circumstances given to them. The first sin that awakened Paul's consciousness to his depravity was his covetousness--while the rich young ruler's apparent sin was his love for his wealth; these are both different sides of the same coin.

In telling the parable of the talents, Jesus described how God, the master in the parable, distributes talents unequally among his servants. These talents could be viewed in a purely economic fashion, but throughout church history this parable has been understood to be referring to more than just money in the bank. God distributes cognitive abilities, athleticism, charisma, leadership ability, wisdom, creativity, innovation, musical and artistic ability seemingly randomly throughout the peoples of the world.  Even within a single family the inequity of talents is readily observable. And as we know from elsewhere in scripture, those parts of the body that seem less important are often more vital.

How are we supposed to respond to God's seemingly unjust distribution of these talents? We should praise Him, as He makes His glory manifest in different people and their abilities. We should also be careful to pursue equality of opportunity where those inequalities are artificially manifested while also eschewing the godless pagan ideology of Marxism which seeks a temporal utiopianism by pushing the equality of outcomes and blaspheming God for creating a world with inequalities.

This ideology says all inequalities stem from systemic injustices--effectively accusing God of being unjust. While there are doubtless injustices in the world that the Church is not effectively addressing, Cultural Marxism contains within its tenants fundamental presuppositions that are diametrically opposed to Biblical Christianity and the Word of God.

The man who buried his talent in the parable blames God--accusing him of injustice. He says he could not succeed because the deck was stacked against him. Because of the inequality of his situation, and the capriciousness of God, he says he was paralyzed in fear. He had listened to Job's wife who said, in the face of God's apparent injustice, "Curse God and die." He externalized his own failure to utilize the talent that God had given him onto his master--denying his own moral agency.

This is the same attitude that those that subscribe to the intersectional worldview take towards their 'oppressors.'  Brothers and sisters, when we undiscerningly promote the ideologies of Critical Race Theory, Intersectionality and Cultural Marxism, we are blaspheming God and accusing him of injustice while at the same time removing the moral agency of those we perceive as victims of injustice. This is partiality, and it is, according to God's Word, transgression against the law of love.

"Give me neither poverty nor riches; feed me with the food that is needful for me, lest I be full and deny you and say, “Who is the LORD?” or lest I be poor and steal and profane the name of my God." Proverbs 30:8-9

God does not give unequally because he is hard and unloving--as the man in the parable accuses his master of being. Instead, God gives to each according to His good and perfect will. It is what we do with what we are given, how we respond within the situation in which God has put us that is of vital importance. If, like the rich young ruler, I am placed in a position of affluence, influence and opportunity--and yet become a slave to the things of this world, I am in no better position than the man that is filled with covetousness for his neighbor's property, power, or relationships and dishonors God through theft.

With Paul, let us learn contentment and to seek Biblical justice. "I know how to be brought low, and I know how to abound. In any and every circumstance, I have learned the secret of facing plenty and hunger, abundance and need. I can do all things through him who strengthens me." Phil 4:12-13

I study patterns on quantity of} hundred slot machine plays, taking part in} every week. When taking part in} slot machines, I have have} retained patterns over the years. If I 토토사이트 get free spins or a bonus, I will spin perhaps a few instances after understanding I will get nothing, then I will change games immediately. You have to be very focused when taking part in} and be very affected person. When you could have} a low steadiness, guess small as want to|you must} build up your steadiness slowly; then, whenever you get to around 200, I would say you can begin taking part in} the jackpot games, guess extra per spin on regular slots, and so forth. Slot manufacturers use one other trick to provide the feeling of possibly successful and lacking out on the final couple of reels.